skip to main | skip to sidebar

I have written an article which has been published in the latest Australian Multihull World - Out Now!  Issue #134
If you want to read about our day and how we coped you should be able to get a copy at a magazine store near you, or ask them to get one in for you.﻿ 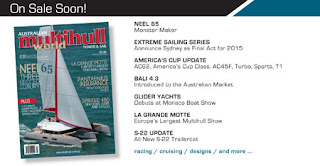 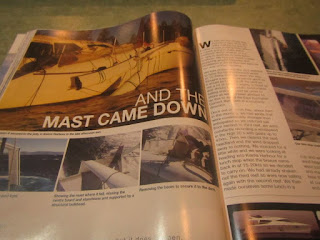 Posted by DamyKell at 6:25 PM No comments:

Favourite Photos from the past couple of months.

Some of our favourite photos from our recent adventures.
﻿
﻿
Wild Life the kids have found on their exploring. 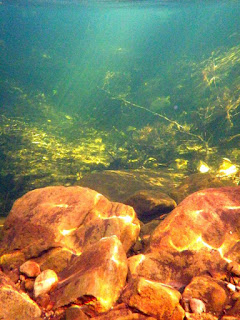 ﻿
A day trip on the public transport.  Bondi Beach and Sydney CBD. 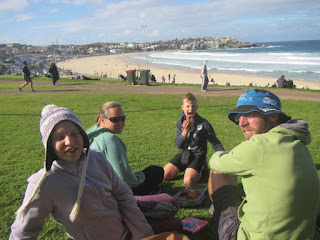 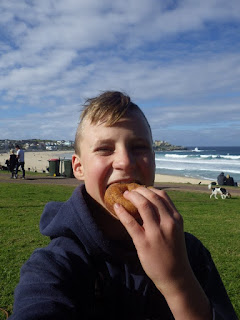 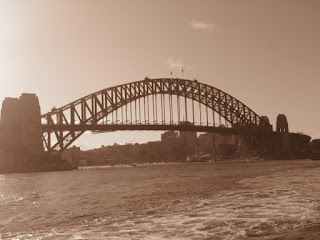 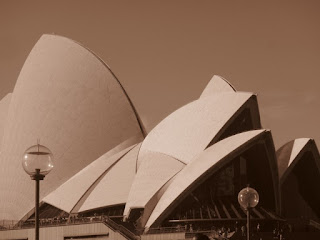 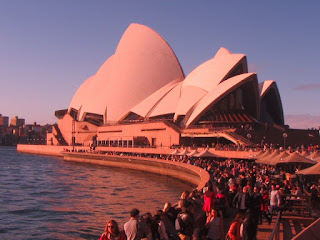 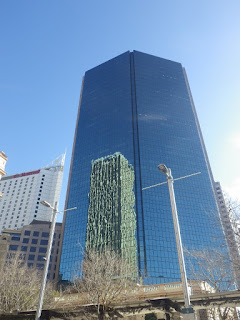 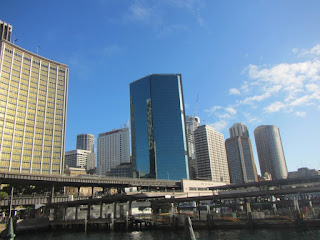 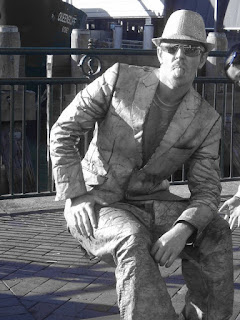 Posted by DamyKell at 6:10 PM No comments:


After stepping the mast we had a three week wait for our sails.  During this time Dan found a bit of work as well as finishing off jobs on the boat.  The kids and I concentrated on education and visiting the local libraries and continuing to explore parts of the Royal National Park.  We enjoyed a meal out with another cruising family that have resettled into land based life again as well as catching up with friends that we have met during our stay in Port Hacking. 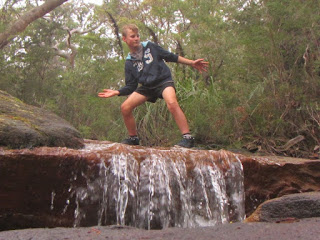 Late on the last day of July we had our sails dropped off at the closest boat ramp and the next day was spent getting them back in place and sorting out new sheets and halyards and re setting up the reefing system.


We then spent several days waiting for the winds we were comfortable with to travel north. During this time we based ourselves around Cronulla and Bundeena, enjoying walks, poking around church op-shops and watching the local wild life.


To move anchorages and get around we did little practice sails with the genoa, but didn’t get the main up until the Friday when we sailed from Jibbon Beach, Port Hacking to Barrenjoey Beach, Pittwater.  This was our first “real” sail since the mast broke and Dan and I were both feeling nervous, but excited, and we took it very cautiously, choosing a weather forecast that was for light winds dying away later in the day. We left Jibbon beach just after 7am and throughout the day had a range of sail configurations ending up with just our kite for the last couple of hours and arriving at Barrenjoey around 1530.  This allowed time for a quick cuppa and then we headed ashore and up to the Barrenjoey light house to enjoy the view with a quick walk along the surf beach.

For the next week we explored the waters around the Kuring-Gai Chase National Park where there were plenty of courtesy moorings for us to choose from.  We did short walks around the park and visited the Discovery Centre.  It was fantastic for wild life and we saw an echidna on one of the tracks as well as many birds and the kids also came across a lace monitor (sand goanna) sunning its self beside a track.

On the Friday we headed back towards the open ocean spending the afternoon at the Basin in Pittwater.  This was a lovely day picnic area or camping spot with a lagoon and lots of wallaby grazing on the park land.  As the sun started to disappear we headed back to Barrenjoey so that we would have an easy start to continue north the next day. 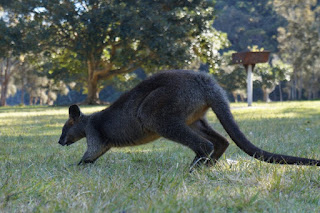 
Again, we chose lighter winds than we would have previously to sail with and had a big day, about 80nm, ahead of us.  We left Pittwater at 7am and managed to sail with main and kite until mid afternoon, when the wind died completely and we ended up motoring the rest of the way.  During the day we saw dolphins and whales in the distance and as we came past Newcastle there was ship after ship anchored waiting to get into port.  Later in the evening it started to rain and as we got closer to Port Stephens the sea state become very confused making the last couple of hours very uncomfortable.  We got into Shoal Bay just inside Port Stephens at 10.30pm and picked up a courtesy mooring off of the village.  We had been in here before on our way south in 2013 so were confident in coming at night, which we would normally try to avoid.
The next day we had a quick stop in Nelson Bay to stock up on fruit and vege before heading up into the surrounding waterways to meet up with friends in a tiny village called Bundabah in North Arm Cove.  We enjoyed a week of meals out, play time, and exploring the area. 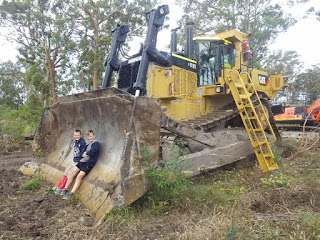 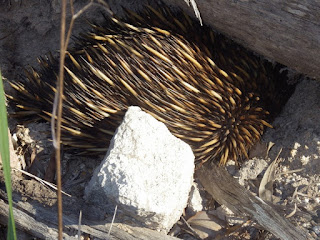 As well as catching up with friends, we met another couple building a Schionning catamaran in the back shed and spent some talking with them about life on board.  They also kindly took us on a tour of the area including some look outs and a trip along the largest moving coastal sand dunes in the southern hemisphere.  This was a real treat as often when we are sailing we see these things from distance, but can’t get close enough in the boat to be able to enjoy them. 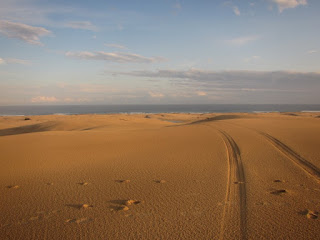 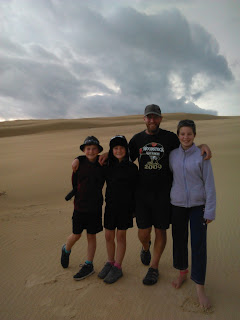 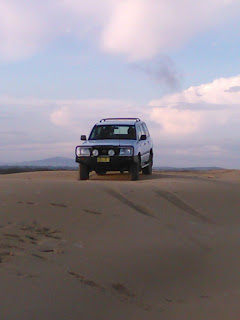 As I am writing this we are again waiting for weather we are comfortable with to continue north.  We did think it would be earlier in the week, but forecasts change and we are now waiting for the end of the week.  We plan on doing day sails at the moment if possible as wind gear is one of the only things we are yet to replace and it isn’t easy sailing in the dark when you can’t see which direction the wind is coming from.  Also all Division II crew seem to have come down with head colds and feeling less than average so a few days chilling out and not having to worry about moving is appreciated.
Posted by DamyKell at 5:51 PM 1 comment:

As previously mentioned in our last blog entry we have been busy repairing the mast, and last Friday we managed to get the “flaming mast” standing again.  We are still awaiting our sails to be repaired, as we only decided after the mast was up that we would be able to get the main fixed, so haven’t yet had a sail.


Photos below to show the journey, and now we just need to pay the bills...... 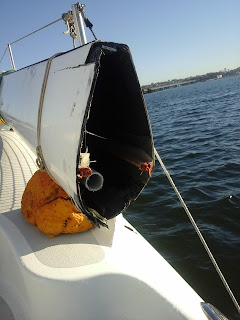 DamyKell
Nelson, New Zealand
Hi. Dan and I had a dream of travelling with our children and decided that we would give it a go by boat. 10 year plan finally reached its start point in May 2008 when we launched our home built Schionning Design sailing catamaran (Cosmos 1160) called Division II. We are currently finishing our boat while living in the Nelson Marina, working, homeschooling the kids, and dreaming of when we will be sailing away. Email address: kellahanklan@gmail.com